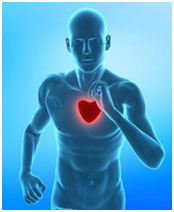 The atherosclerosis is characterized by a deposit of a plate, essentially composed of lipids (called an atherome) onto the walls of the arteries.

Complications of an atherosclerosis are responsible

for the first two reasons for death worldwide

What is an atherosclerosis ?

It is the loss of elasticity of the arteries due to sclerosis, which is itself provoked by a built-up of fatty deposit in these same arteries (mainly of the bad cholesterol, called LDL).

This deposit forms the atherome which could be only a plate, holding back arterial light (stenosis), up to an obliteration of the blood vessel (thrombosis). All arteries of the body could be affected by an atherome, but mainly the arteries of big and middle diameter get it.

Which are the risk factors ?

The risk factors for an atherosclerosis are tobacco, cholesterol, or also arterial high blood pressure.

Which are the symptoms ?

The great majority of atherome plates are asymptomatic. Nevertheless, a plate which is progressively getting thicker can obstruct blood circulation (most often of the coronary arteries, the carotids and the arteries of the lower limbs) and so the cause for appearing symptoms from aproximatively 40 or 50 years old onward.

The signs of it are :

The majority of these plates are stable. Nevertheless, when one of these arteries cracks, the consequences are often dramatic: In appr. 80% of the cases of suddern death the origin is a cracking plate of the atherome.

A cracking plate namely can provoke a myocardial infarct.

Which treatments are available ?

Prevention of atherosclerosis consists in battling against the cardiovascular risk factors. :

However, drugs, statins help stabilizing plate evolution of persons with a cardiovascular risk. The statins help lowering the amount of LDL cholesterol.

The most common treatment of atherosclerosis pates is a coronary angioplasty. It consists in putting a balloon into an artery and to leave a stent in place, which is a mechanical device which maintains the diameter of an artery stable and hinders it to close again. Its rate for success is 95% for the most simple lesions and 85% for more complex ones.